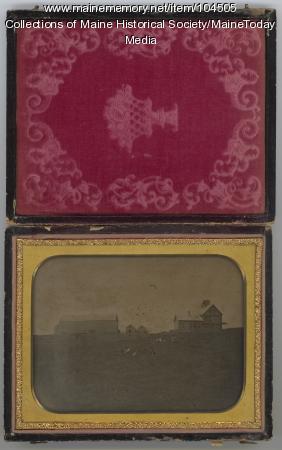 The home of Dr. John Moreland Cummings, on a small island off the coast of Cape Elizabeth, has long been associated with the Richmond Island Coins, a buried treasure wrapped in legend, found on the doctor's property.

In May 1858, a farmer and his son working on the land plowed up a broken stoneware jar, a signet ring, and thirty coins of British origin (hailing from the reigns of Elizabeth I, James I and Charles I). Legend recalls that the booty, typically called the "Richmond Island Treasure" was buried by the island's first European inhabitant, Walter Bagnall, who settled there in 1628.

Walter Bagnall became wealthy by cheating the Wabanaki, specifically the female leader Warrabitta’s family, at his trading post. According to Massachusetts Governor Winthrop, "Bagnall...was a wicked fellow, and had much wronged the Indians."

Bagnall had violated his social responsibilities, and as a result, Warrabitta’s brother, Skitterygusset, killed Bagnall in 1631 and burned down the trading post.

Note from MHS accession log (1919) reads, "Ambrotype of Richmond's Island showing John Moreland Cummings' house, later destroyed by fire. Augustus and Stephen Cummings (and probably Dr. John [Cummings] too) are in foreground (184?-185?). The island was purchased by Dr. John Cummings and his father."