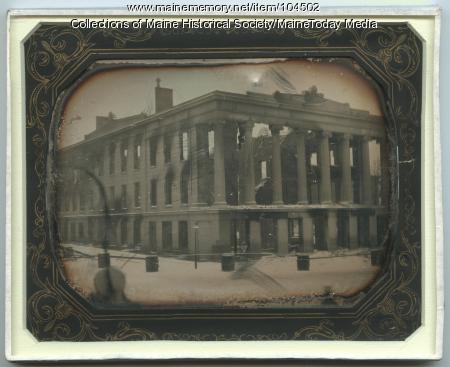 Considered the finest Greek Revival public building north of Boston, the Merchants' Exchange was built at Middle and Exchange Streets in Portland between 1835 and 1839 from designs by the Boston architect Richard Bond. Local businessmen conceived this elegant $135,000 granite structure with its ionic columns and saucer dome as a new state Capitol, in an attempt to bring state government back to Portland from Augusta.

When this venture failed, the building became the city's U.S. Custom House. After fifteen years, it burned on January 8, 1854. Shortly thereafter, Samuel L. Carleton photographed this stark record of its gutted stone shell, damaged by the heat of the fire. Demolition was the only alternative. Between 1854 and 1965, two more Federal buildings occupied the site.