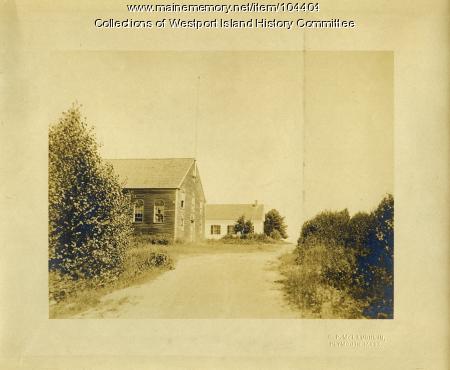 The Town Hall, built in the 1790's, first served as a Freewill Baptist Church and later was used by both the Baptists and the Methodists. The Methodists moved to the "Community Church" in 1864. In 1885, the town acquired the building and remodeled it to be used as the Town Hall. Both buildings are on the National Register of Historic Places.

A similar photograph of the Town Hall with the Westport Community Church in the background, looking north on the main road was published in the Bath Independent newspaper in 1908. The accompanying description noted that it was one of the oldest buildings on Westport "some say it is the oldest..." and that it was painted a "dark red" and in a "good state of repair".

The photographer, Edward P. McLaughlin was the son of sea captain Thomas McLaughlin who lived on Westport. Edward later had a photography business in Plymouth, Massachusetts.