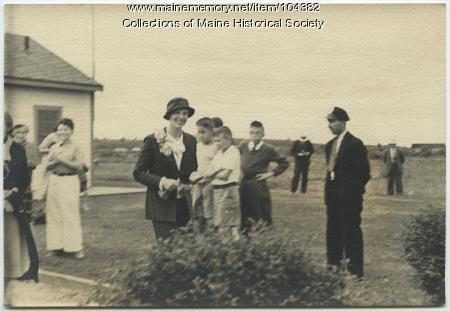 Amelia Earhart (1897-1937) visited Maine in 1933 and 1934 to promote an interest in flying to young girls and women, and to advertise commercial flying through the Boston Maine Airways.

Earhart attended Columbia University for one year studying medicine, however left after one year. Soon thereafter, a friend of her father's took her up in an airplane, and instilled in her a desire to fly planes herself. She was only the sixteenth woman in the United States to be issued a pilots license and in 1922 broke the world elevation record for a female pilot, at 14,000 feet. Her most recognized accomplishment took place in 1932 when she became the first woman to fly solo over the Atlantic Ocean. In 1937, Earhart and Fred Noonan (1893-1937) attempted to fly around the world, but went missing after a their plane presumably went down. The remains and story of Earhart, Noonan, and their plane is still a mystery today.