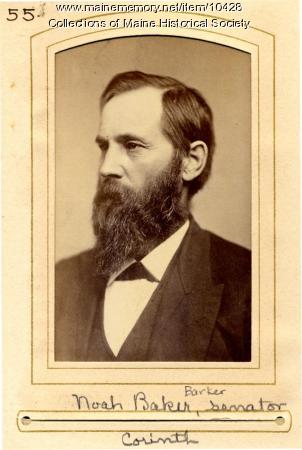 Noah Barker of Corinth served as a senator in the Maine State Legislature in 1880.

He was born in Exeter and educated in the common schools and at Hampden and Foxcroft Academies.

He was a member of the Superintending School Committee, Town Clerk, Selectman, County Commissioner, and State Land Agent and served in the Maine House of Representatives in 1838, 1840 and 1856, and the Senate in 1879.

He began his career as a Democrat, but became a Republican as he was opposed to extending slavery.