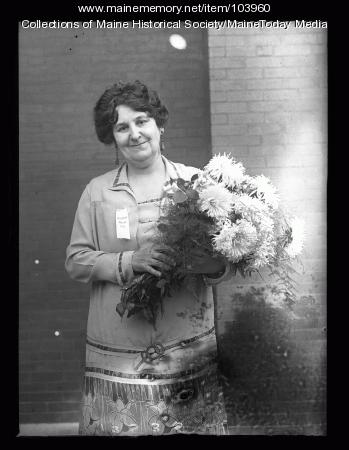 Myra Powers McLean attended an event for the Woodrow Wilson Club, which honored Woodrow Wilson after his death in 1924 for his support in women's suffrage. During Wilson's second term, the 19th amendment passed to allow all women to vote across the country.

Mclean lived across from the Blaine House in Augusta, in the brick house that is, as of 2021, owned by the State of Maine. Her husband was Ernest McLean who was the Mayor of Augusta. He ran to be the Governor of Maine and it was said that Myra McLean was the first woman in Maine to publicly "stump" for her husband on the campaign trail. He lost but remained very involved in politics.

Myra McLean had a degree from Emerson College in Boston. She was born and raised in the Mount Desert area.