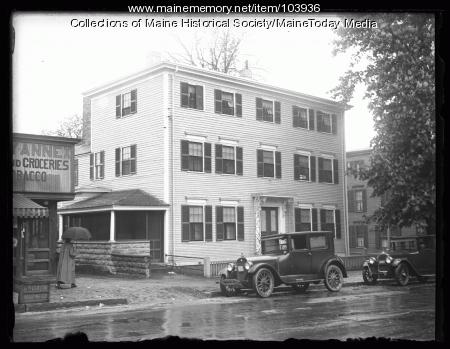 James Crawford, alias Harry A. Kirby, was arrested at the lodging home of Frank E. Pond at 34 Market Street Newburyport, Massachusetts, on May 25, 1925, for the abduction and murder of Aida Hayward and the attempted murder of her aunt. Kirby burned Hayward's cottage with her aunt inside it before he escaped to his own cottage with the victim. The paper printed an arrow which indicated which room he was hiding in.

After news of Kirby's Newberryport arrest spread, thousands of spectators gathered in Augusta awaiting his arrival. Once transporting officers heard the news of the large crowd, they leaked information that Kirby was to stay in Portland for the night, and then would finish the last leg of the trip in the morning. The ruse worked, the crowd scattered and Kirby was driven to Augusta after midnight without incident.