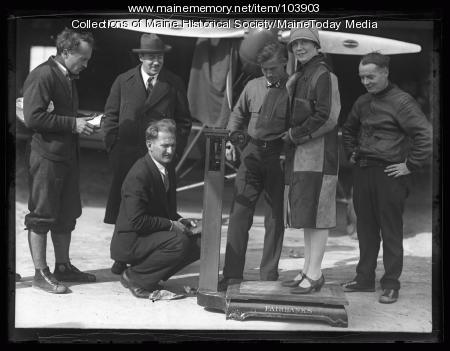 On October 10, 1927, female aviator Frances Wilson Grayson, along with her crew, landed her Sikorsky S-36 amphibian plane the "Dawn" on Old Orchard Beach. Her goal was to set up base in Old Orchard for her transatlantic flight to Copenhagen. Her crew consisted of Wilmer Stultz, pilot, and Brice Goldsboro who was in charge of navigation. Grayson would do some of the flying as well.

While living in Manhattan, Grayson was inspired by Charles Lindbergh's historic flight in May, 1927, and she became determined to be the first woman to match his feat. Miss Grayson landed in Maine to much fanfare and excitement. Poor weather hampered her attempts to make the flight from Maine; during the first attempt the plane turned around immediately due to high winds, and the second flight her pilot Wilmer Stultz made the decision to turn around after 500 miles due to dangerous weather.

Not deterred from her failure in Maine, Frances Grayson attempted to complete the trip again on December 23, 1927. Her flight plan was to fly from Long Island to Newfoundland and then eventually to London. Grayson and her crew took off at 5:07 P.M. from Long Island. The crew radioed that something was wrong later in the evening and the plane never reached Newfoundland; their remains were never found and the last time they were seen was off of the coast of Cape Cod at 7:10 P.M. Frances Grayson was 35 years old when she died.