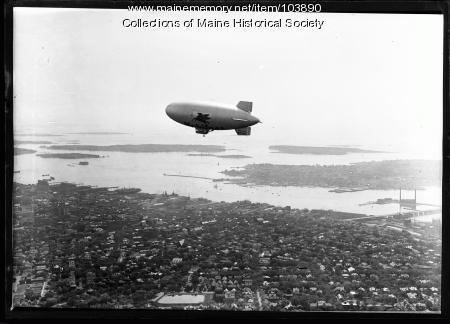 The winged Pegasus logo for Mobil Oil, or in this instance, Mobilgas, was the perfect symbol to greet aerial photographers on a near-by blimp. Traditionally called air-ships, blimps came into commercial use.

In the 1930s. A select number of airships were leased to various companies as a unique way of advertising.

Portland Press Herald/Portland Evening Express photographers captured this image of the Mobilgas blimp as it cruised above Portland. A noted feature of this photograph is the Bramhall Reservoir at the lower left-center. Built in 1869 near Vaughan and Brackett Streets, it held water pumped from Sebago Lake for the city of Portland. The reservoir ceased operation in 1964. It was paved over to make way for an expanded Maine Medical Center.