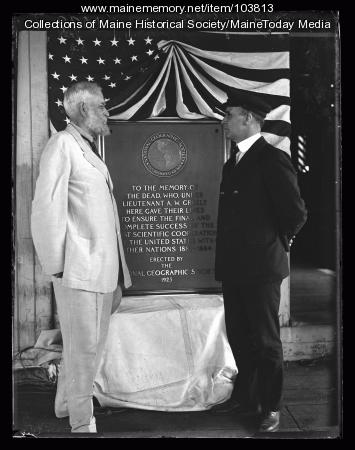 On June 24, 1923 the "Portland Sunday Telegram" captioned this front page photo, "General Greely and Explorer MacMillan inspecting the memorial table with will be taken into the frozen North by the MacMillan party." Adolphus Greely, left, came to Wiscasset for the June 23rd departure of MacMillan and his crew of six on an Arctic expedition. The explorers planned to study terrestrial magnetism, atmospheric electricity, meteorological trends, and the local flora and fauna. The first stop, though, was to erect this tablet at Greely's old camp at Cape Sabine, in arctic Canada, where nineteen of his twenty-five crew members had perished by 1884.