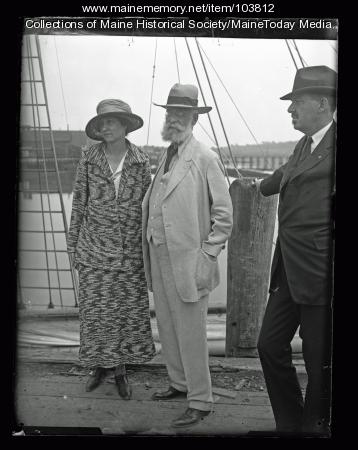 Explorer Adolphus Greely and his daughter, Mrs. James C. Kress, were photographed while in Wiscasset for the departure of the MacMillan Arctic Expedition on June 23rd. This picture may have been taken aboard the Bowdoin, the ship which carried Captain Donald MacMillan and his crew of six. MacMillan's first destination was to Cape Sabine, in arctic Canada, to erect a tablet in honor of General Greely's ill-fated expedition in 1881. Nineteen of Greely's twenty-five member crew perished before the survivors were rescued in 1884 from Cape Sabine.

Greely, who lived until he was 91, was 79 at the time of this photograph. The Portland Sunday Telegram ran a similar picture in its June 24th issue.