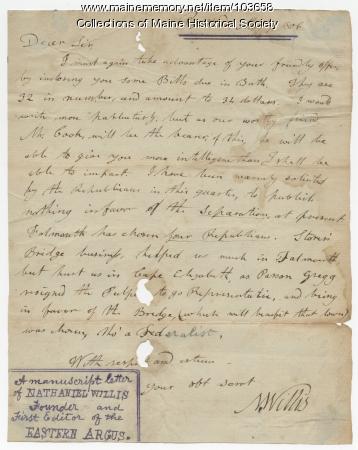 In a letter to William King, Nathaniel Willis noted political entanglements within the newspaper business, especially on the topic Maine's separation from Massachusetts. In general, Federalists were opposed to separation, while Republicans were pro-separation. By the time of this 1806 letter, however, Republicans were concerned with winning elections in New England, and the party asked the Republican Willis to not publish anything too controversial (i.e. separation), risking election success. Orchard Cook, an ardent supporter of separation, transmitted the letter to King on Willis’s behalf.

Nathaniel Willis was a newspaper editor and publisher born at Boston in 1780. He moved to Maine in 1803 where he established the Eastern Argus.