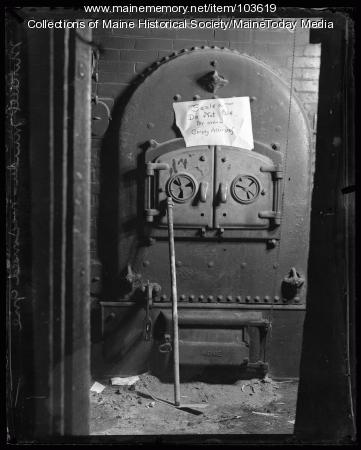 On July 12th, 1930, James M. Mitchell "incinerated the body of Lillian McDonald after he killed her." The furnace was located in the basement of Loring, Short & Harmon stationary store, at 474 Congress St., where they both worked.

Ms. McDonald was distributing the weekly pay envelopes when, according to Mitchell, they had a short verbal altercation. Mitchell, who confessed to the murder, "hit her with his fist then struck her over the head with the iron pipe," shown in the picture.

On July 14th, 1930, the Portland Press Herald devoted much of the front page and page nine to this story. This photo was not used in the edition but is similar to the one that was.