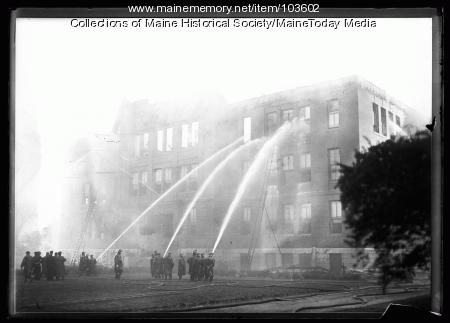 On May 20th, 1921, Deering High School suffered a major fire that killed Captain James C. Kent of Engine 6 and injured five other firemen. Although this picture was not used in the Portland Evening Express article on May 21st, it shows the collapsed roof that killed Captain Kent. By the time the fire department arrived, after 4 am, the "roof was undulating like an inflated balloon" (page five).

This was the fourth school fire in Portland in 1921 and was of unknown origin. It started in the library, which did not have a fireplace or stove, and the watchman was absent. After the fire, students were moved to the Annex building and church locations while a new school building was constructed.