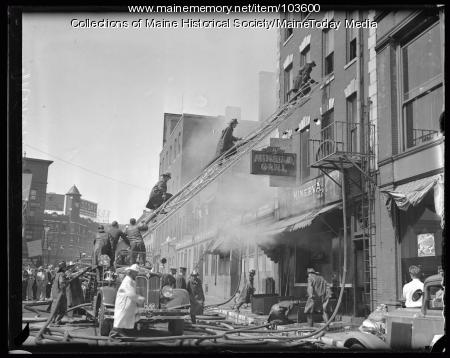 On August 20th, 1936, Portland Fire Department firemen climbed their new extension ladder while battling a fire at the Libby Building on Congress Street. They also used the truck, added to the department just the month before, to rescue three upper floor residents from the roof.

On November 10th, 1936, fire fighters returned to this location to fight a fire in the Chipman building next door. Again they used the extension ladder to rescue four residents from the roof.

This fire truck is from Portland Engine 3 Ladder 3. It is a Seagrave (with an S emblem on the front bumper) 65 ft. steel extension ladder truck bought by the city in July 1936.