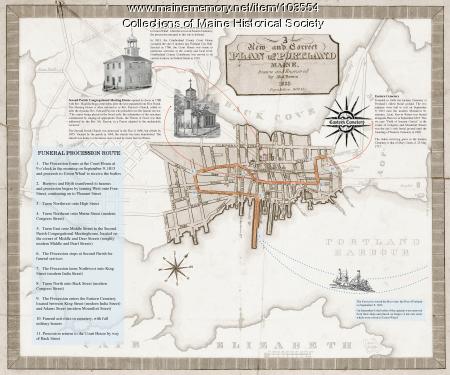 On September 5, 1813, the H.M.S. Boxer and the U.S.S. Enterprise engaged in a naval battle off the coast of Monhegan during the War of 1812. The dominant Royal Navy encountered the developing U.S. Navy throughout the war, but the battle of the Boxer and the Enterprise embodied a level of honor and respect not seen in modern warfare.

Both Capt. William Burrows of the U.S.S. Enterprise and Capt. Samuel Blyth of the H.M.S. Boxer were struck down during the fighting and neither survived this legendary battle. After a grueling exchange, the Boxercapitulated, and the Enterprise towed her prize into the Port of Portland, as witnessed by Capt. Lemuel Moody from the Portland Observatory on Munjoy Hill.

The City of Portland paid its respects not only to the fallen Capt. Burrows, but also to the much admired Capt. Blyth, with a joint funeral procession through the city, culminating with a side-by-side burial in Portland’s Eastern Cemetery. The map shown here highlights the funeral procession. It includes stops made along the funeral route, including the Court House, Union Wharf, Second Parish Church, and the cemetery.

This map was digitally created in 2013 in commemoration of the battle's 200th anniversary. It is based on an 1823 map of Portland by Abel Bowen.