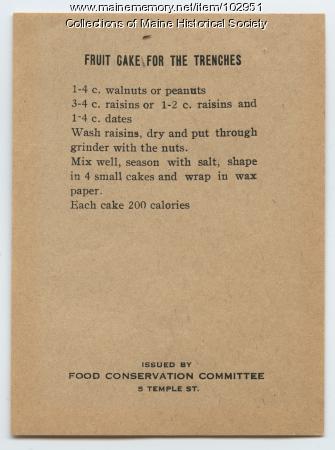 After the United States joined World War I, the Food Conservation Committee of Maine created this recipe for "fruit cake for the trenches." The recipe encouraged the use of readily available ingredients like date and raisins, instead of necessities like sugar.

The Food Conservation Committee, with a location on Temple Street in Portland, served as the Maine branch of the U.S. Food Administration. It was responsible for the dissemination of conservatory materials, like ration recipes.

Although World War I–era food conservation began as early as 1914, the United States Food Administration was created in 1917 by executive order from president Woodrow Wilson (1856-1924). It aimed to incorporate individual or local efforts and ensure important resources like wheat, meat, and sugar were readily available to starving Europeans and soldiers fighting on the front lines.