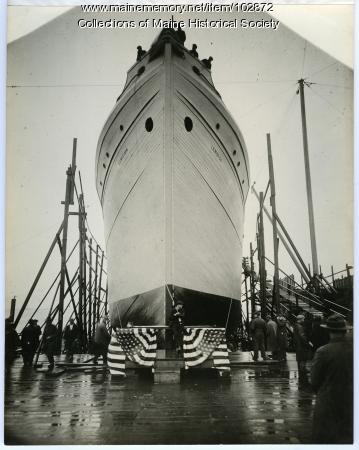 The completed S.S. "Lewiston" at the Cumberland Shipyard in South Portland on October 31, 1918 preparing for launch.

The Cumberland Shipbuilding Company, owned by James C. Hamlen, built wooden vessels commissioned by the United States Shipping Board (U.S.S.B) during World War I. However, after the war, the government severed their contracts with many shipbuilders, without payment.

"The Cumberland Shipyard was left with two or three unfinished vessels. Only after James C. Hamlen Jr., the son of James C. Hamlen, went to Washington and confronted the President in person was the firm allowed to keep one of the unfinished vessels, finish it off as a schooner, and charter it out, hoping to recoup some of the over all expenditures involved in the shipbuilding operations. But the yard, like most others that relied on the stability of wartime contracts, would never recover from the contract severances." (Barrels and Daring, 1977).