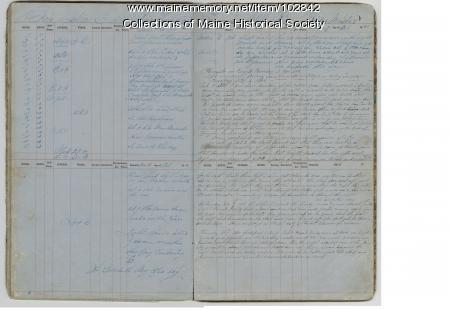 An 1858-1860 logbook of the 'Julia E. Arey' contains an account of the capture and flogging of Captain E.W. Ryder by Georgian slaveholders in November 1860. On November 6th, 7th, and 8th, 1860, an unknown sailor (possibly the first mate) recorded his account of the incident. Other accounts appeared in abolitionist publications after the start of the American Civil War.

At 7 PM on October 15, 1860, the brig 'Julia E. Arey' passed between St. Simon's Light and Cumberland Light to enter the mouth of the Satilla River. Captain E. W. Ryder sailed the brig from Thomaston, Maine to exchange cargo near Jeffersonton, Georgia, before sailing on to Trinidad.

On November 6th, the account describes a mob from Jeffersonton, Georgia, led by the local 'Captain of Patrols'. The mob boarded the ship in search of a slave who was known to have visited the vessel several times. The following night, the mob returned to search the ship. Finding nothing, they arrested Captain Ryder, put him on trial, and sentenced him to 25 lashes. The captain and the second mate (his son, Joseph Ryder), were jailed in Jeffersonton until the vessel left the Satilla River two weeks later. The incident became a propaganda tool for both abolitionist and pro-slavery factions.

The brig 'Julia E. Arey' was built in Frankfort, Maine in 1851. She was owned T.J. Stewart of Bangor at the time of the incident. In 1859, she was captained by G. A. Stone and sailed from Bangor to Cuba by way of New York. In 1860, she sailed out of Thomaston as a merchant vessel captained by E. W. Ryder.

In general, the logbook was used to record a vessel's course and cargo, as well as daily remarks. It covers the period of both Capt. Stone and Capt. Ryder.