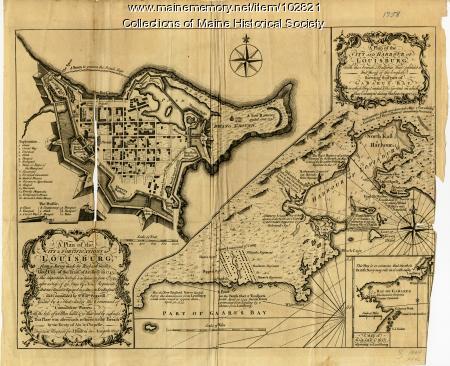 This plan of the city of Louisburg was published by John Hinton via his London-based periodical "Universal Magazine of Knowledge and Pleasure." The plan is based upon a June 17, 1745 survey by Richard Gridley, a Lieut. Colonel in the Massachusetts provincial militia.

The cartouche at the lower left describes the survey "after a siege of 49 days by nine regiments that were raised & equipped in 50 days in New England." The invading New England-based colonial troops were commanded by Sir William Pepperrell of Kittery and supported by a naval fleet under the command of the Royal Navy's Commodore Peter Warren. The map references 101 men killed, with an additional 30 lost to sickness. Of course, this statistic excludes French casualties.

The 1745 siege was a strategic maneuver during King George's War (also known as the War of Austrian Succession). Louisburg, a French colonial city and fortification in modern-day Nova Scotia, represented a threat to New England's maritime economy and personal safety. While the siege was successful, the fort was returned to the French with the Treaty of Aix La Chapelle, despite vocal opposition from Massachusetts (and Maine).

In 1758, a second Siege of Louisburg was undertaken by the British and colonial troops as part of the French and Indian War. English success in 1758 essentially ended the French colonial period in North America. It is likely John Hinton published this 1745 plan as a homage to the 1758 undertaking at Louisburg.