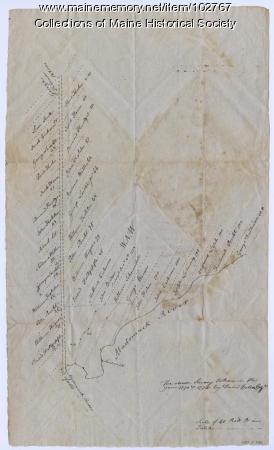 German immigrants and first generation German-Americans owned land on the west side of the Medomack River in modern-day Waldoboro when this map was made, twenty-two years after Germans originally settled the area. The numbers next to each name represent acreage, including the names of over 24 landowners and their plots.

In 1773 and 1774, this survey was commissioned, likely in preparation for the incorporation of the town of Waldoboro set for 1774. An inscription on the reverse of map reads “Surveyed for the Germans in consequence of the Pemaquid Claim.”

The Pemaquid Patent was a 17th century land grant given to two Englishman consisting of 12,000 acres near modern day Bristol. About a century later, considerable efforts were made to clarify holdings in the region. These efforts were spearheaded by an heir to the grant, Shem Drowne. Drowne organized a holding company in 1753, known as the Pemaquid Proprietors. As with many colonial land grants, conflicting information and a lack of structured government or agreed upon boundaries resulted in legal disputes.

A competing land grant in the mid-coast region, the Waldo Patent, distributed land around the Medomack River to German immigrants who began settling in the region as early as 1739. By 1774 the Germans were well established in Broad Bay.