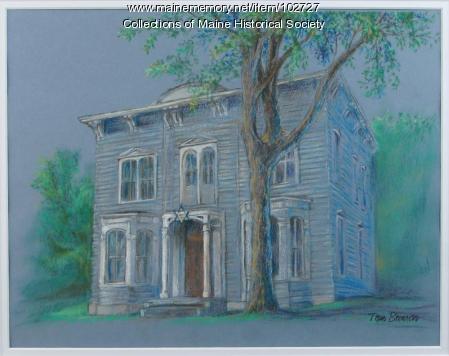 In 1924, Sarah Unobskey funded the building of a synagogue in Calais, and hired a rabbi. In an unconventional move, she named it, The Congregation of Chaim Yosef, in honor of her dead husband. It was the first and only synagogue in Washington County, active until 1974.

Most Jews who came to the United States from Europe settled in large cities such as New York and Boston, where they found a vibrant religious community. Being Jewish in Maine was challenging—the Unobskey family experienced anti-Semitism in Eastport, had difficulties finding kosher foods, and found limited opportunities to worship since the closest synagogue was in Bangor.

Certain Jewish prayers require the presence of 10 people, a minyan or prayer quorum. Demonstrating the difficulties of Jewish worship in remote areas of Maine, Sidney Unobskey said that his businessman father, Arthur, “would never sign contracts in New York or Boston. He would tell the salesmen they had to come back to Calais to sign; that way he was able to have minyan.”