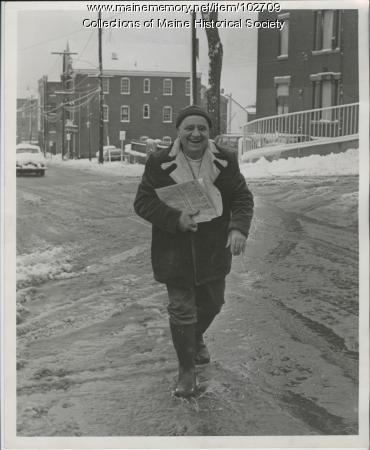 Popkins Zakarian was an Armenian immigrant and community activist in Portland. Zakarian became so involved in opposing Portland’s municipal politics that he ran for city council and was elected in 1966, serving two stormy terms.

Zakarian’s gadfly tactics were not popular with other politicians. He was an outspoken critic of Portland’s Urban renewal programs, and once compared the Franklin arterial to the Berlin Wall. The Portland Evening Press reported in January, 1972, “Fellow city council members are annoyed by Mr. Zakarian’s habit of wasting time by raving on subjects not before the committee, so Councilor Loring has banned him from meetings of the community development committee.”

Zakarian made an unsuccessful bid for the Maine Senate in 1968, and was not re-elected to Portland’s City Council, effectively ending his political career.