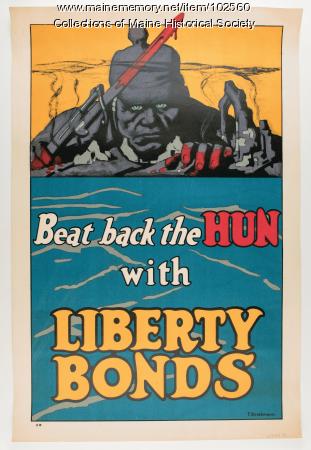 During World War I, American propaganda played on the fears of its citizenry, including potential foreign invasion by the 'barbaric Hun.' Such propaganda tactics were used in fund raising campaigns, specifically the Liberty Bond program.

The phrase ‘Hun’ refers to the Hunnic Empire, specifically Attila the Hun in the 5th Century. The term became associated with Germany after Kaiser Wilhelm II gave a speech in 1900, praising the aggressive and merciless tactics of Attilla’s armies. The speech, known as the Hun Speech or Hunnenrede, is considered the origin of the pejorative term.