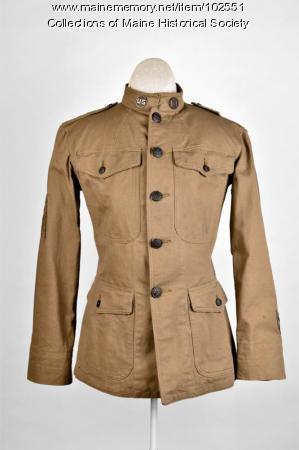 Ralph J. Flint of West Baldwin enlisted in the U.S. Army in December of 1917. He served in France, specifically the Meuse-Argonne Offensive, as part of the 6th Infantry Division, 318th Engineers. He rose to the rank of Sargent 1st Class by his discharge in 1919.

Known as a 'Summer Service Coat' and made from cotton olive drab, this tunic was used by Sgt. Flint in warmer weather. The left collar disk depicts the U.S. Army Engineers symbol, known as the ‘Corps Castle’. The right sleeve insignia (not pictured) also includes the castle, and represents an Engineer, Sargent 1st Class. A red star on the opposite sleeve (not pictured) symbolizes the 6th Division, with the two chevrons indicating a year of European service.