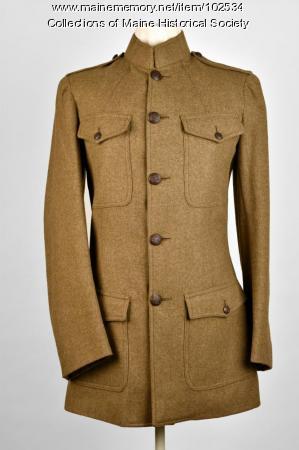 In the early 20th century, the University of Maine maintained a U.S. Army Cadet training program that prepared young men in case of war. Many trained soldiers from UMaine were sent overseas when the U.S. entered World War I in 1917. A addtional group of roughly 1,000 cadets were prepared for mobilization in October of 1918, but were not sent overseas because the war ended in November.

The cadet jacket pictured belonged to Lincoln Lull Turner, a University of Maine student originally from Waltham, Massachusetts. According the the University of Maine Catalog for 1918-1919, Turner was a member of Group A, Company C training division in the cadet program. He registered for the draft in September of 1918, but was not called into service.