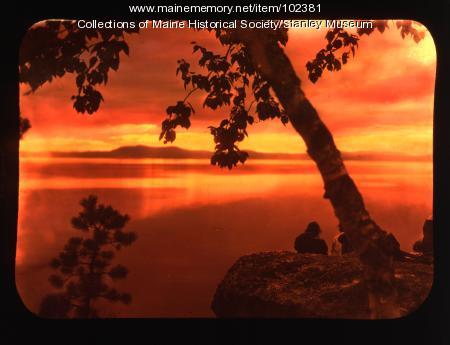 Wohelo, a camp for girls on Sebago Lake, was founded in 1907 by Dr. Luther Halsey and Charlotte Gulick. It continues in operation in 2019. Chansonetta Stanley Emmons and her daughter, Dorothy, are listed in the camp registry for 1918 and Emmons took photographs there for several succeeding years.

Emmons was a well-known Maine photographer of the early 20th century. Emmons was born in Kingfield in 1858 to a farm family with six brothers. She pursued a career in the arts and settled on photography, in part because of her older brothers who invented the Stanley Dry Plate photographic process. As an adult she lived in Newton, MA and returned most summers to friends and relatives in the Kingfield area. Hand colored lantern slides, such as this item, were used by Emmons in her traveling lectures.