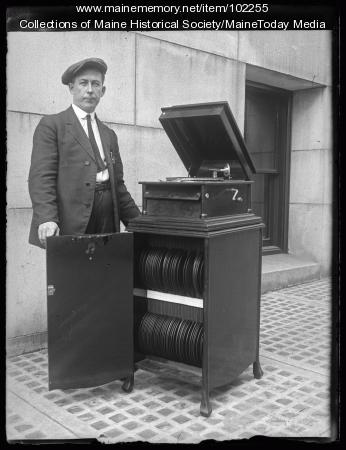 This photograph, taken outside Portland City Hall, is the front view of a victrola that was renovated to hide liquor bottles during the Prohibition.

This model of victrola was patented around 1907 by Eldridge Johnson of the Victor Victrola company. By 1922, radio broadcasts were popular and victrola began to fall out of fashion. Instead of becoming completely obsolete, this victrola was repurposed to hide alcohol.

Maine been attempting to limit the consumption and purchase of alcohol for over seventy years before the National Prohibition (1920-1933). In 1846, there was a law that prohibited the purchase of less than 28 gallons of alcohol at a time, unless it was to doctors for medicinal purposes. This prevented poorer individuals from purchasing alcohol, but not the wealthy.

In 1851 Neal Dow, the Mayor of Portland at the time, wrote a law banning the sale of alcohol, which was passed by Governor John Hubbard. This law was repealed in 1856, but there were continued actions to keep temperance alive in the state of Maine.