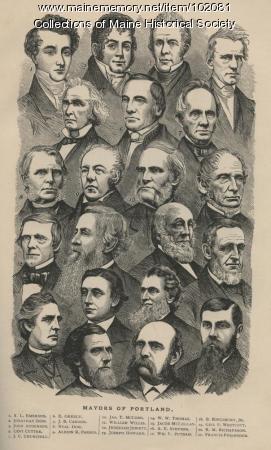 An artistic rendering of Portland mayors through 1876 from Edward Elwell's "Portland and Vicinity: with a Sketch of Old Orchard Beach and other Maine Resorts" first published in 1881 by Loring, Short and Harmon. This mayoral list stops with Francis Fessenden, who served for one term during 1876 and 1877.

Prior to 1832, the City of Portland was designated a town, and therefore didnot elect or appoint a mayor.