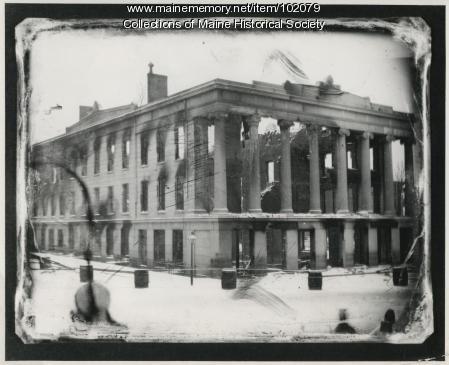 The Portland Merchant Exchange building located at the corner of Middle and Exchange Streets housed the U.S. Custom House during the period of the 1840s and 50s. Designed by architect Richard Bond, the building burned on January 8, 1854.

Initially commissioned by local businessmen in the early 1830s, the Exchange building was sold to the city of Portland during its construction phase, only to be sold again to the Federal Government. During its U.S. Government tenure, it housed the U.S. Custom House, a U.S. Post Office, as well as various office suites.

This photograph is a reproduction print created from an 1854 daguerreotype by Samuel Carleton. The original daguerreotype is in possession of the Maine Historical Society.