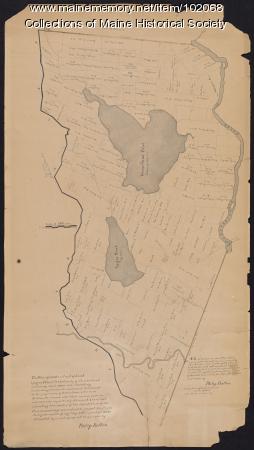 Phillip Bullen drew this early map of the landowners and land plots "lying in Poland in the Country of Cumberland". Although the map labeled the area as Poland, it is actually, as of 2020, the towns of Auburn, Minot and Turner.

Most prominently, it showed Taylor Pond and Wilsons Great Pond (Lake Auburn), as well as the Androscoggin River to the east, stopping at the Lewiston Great Falls.

This region of Maine, collectively known as Bakerstown, was under the Pejepscot Land Claim, which was headed by an organization known as the Pejepscot Proprietors. They were founded in 1714 following the encouragement to settle the "eastern country" by the Massachusetts General Court.

Bakerstown included parts of what are, as of 2020, Auburn, Lewiston, Durham, Minot, Poland and Mechanic Falls.