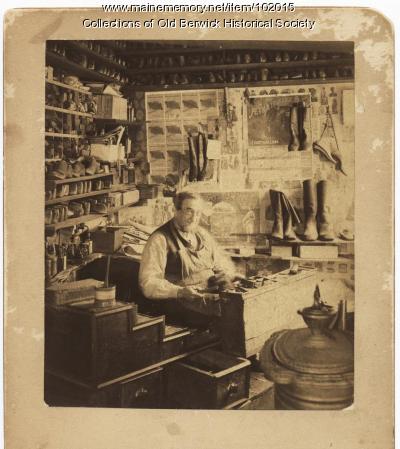 Francis Raynes owned and operated a shoemaking shop in the center ofSouth Berwick. By 1850, he employed up to eight people in the shoemaking trade. Raynes relied on people in town to buy his custom shoes and boots and to supply him with goods and services that he needed. Townspeople relied on Raynes to provide them with new shoes and boots and to repair their old ones.

Shoemaking was an important trade in South Berwick in the 1800s. Francis Raynes was typical of local shoemakers before 1850, supplying custom shoes to order from his shop on Portland Street. His trade prospered when new markets for ready-made shoes emerged in Boston, southern states, and the West Indies.

By 1850 there were three tanners and twenty-five shoemakers in South Berwick. Raynes became an entrepreneur, employing six men and two women making goods valued at $3,600 a year—more than the local sawmill.

But by 1860 Raynes's manufactory was gone, a casualty of overproduction in the shoe industry. Raynes resumed business as a cordwainer, or custom shoemaker, but he could not compete with the local David Cummings and Company shoe factory, built two blocks from his shop in 1872.