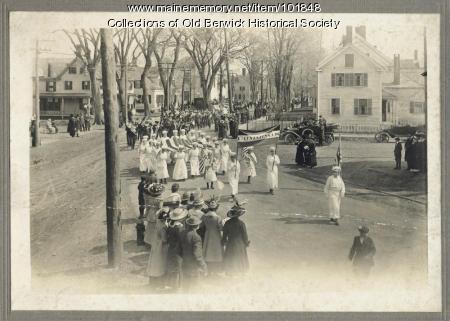 This parade on South Berwick's Main Street was perhaps an early twentieth century Independence Day parade, or the parade for the town's centennial (in 1914), or the World War I "preparedness parade" of 1917.

Women in the middle ground held the supports of a banner that read "Cummings," in celebration of the David Cummings & Company shoe factory, which was the town's largest employer in the early to mid 1900s.

The Cummings factory building on Norton Street was constructed about 1872. It later operated as the South Berwick Shoe, Inc., and, finally, as the Duchess Shoe Company. As of 2016, the building still stands on Norton Street, but it lost all ties to the shoe manufacturing industry in the early 1990s, when it was renovated into an apartment complex.