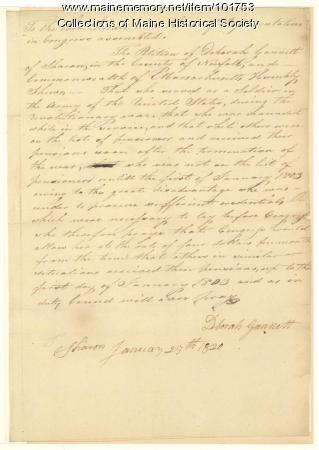 This document is an 1820 petition for increase to a Revolutionary War pension. Deborah (Sampson) Gannett was awarded a disability pension in 1803 after securing documentation of her service in the Continental Army from 1782 to 1783 while disguised as a man.

This 1820 petition argues Sampson was owed back pay on the pension for the years following the end of the war until the 1803 award. Gannett asks for, in addition to her current pension, $4 per month as compensation for the period during which she was not paid.

In May of 1782, under the name Robert Shirtliff, Deborah Sampson enlisted in the Massachusetts 4th Regiment of the Continental Army. She was shot and wounded in battle at Tarrytown, NY; in order to avoid discovery, she extracted one of two musket balls from her own leg without a doctor (the other bullet was never removed, and the wound never fully healed). In the summer of 1783, Dr. Barnabas Binney uncovered Sampson’s disguise while treating a fever, and took her in to his family home to heal, without exposing the truth. She was honorably discharged in October of 1783 after the signing of the Treaty of Paris.

Deborah Sampson was born in Plymouth, Massachusetts, on December 17, 1760. In 1784, Sampson married Benjamin Gannett Jr. in Sharon, Massachusetts and had three children. She suffered from battle wounds until her death on April 29, 1827. Her husband applied for a widower’s pension following her death, and was awarded $80 per year for the rest of his natural life.

This letter is from the Fogg Autograph Collection. John S. H. Fogg, compiler of this collection, was born in Eliot, Maine. He graduated from Bowdoin College in 1846, earned a degree in medicine from Harvard College in 1850 and established his practice in South Boston, Massachusetts.