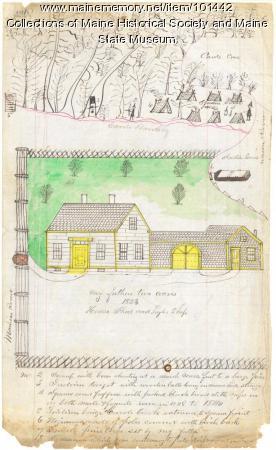 Their son, also named John Martin, drew and annotated this scene at the homestead, probably in about 1846 when he and his mother visited Ellsworth and the old homestead.

Anna Stratton Martin was remarried to Solomon Raynes in 1826. A few years later, the couple, her son, John, and their daughter, Rebecca Raynes, had moved to the Bangor area.

Martin wrote in his journal of the visit to the homestead, "We found my fathers house moved on another lot and various changes Squaw Point cleared and every thing so changed that I saw tears glisten in my mothers eyes."

The drawing was among the effects of John Martin (1823-1904) and is on paper similar to that in his Journal, which he began writing in 1864. The drawing was not included in that volume of reminiscences and illustrations, but another version, with more details and more watercolor added, appears at the beginning the the Journal.