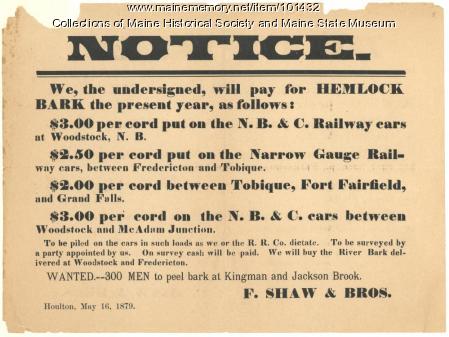 F. Shaw & Bros. tannery in Grand Lake Stream advertised in 1879 for hemlock bark, which it used in the tanning process.

Shaw & Bros. operated the world's largest tannery beginning in 1870. In 1883, the tannery failed when a boot maker in Boston, to whom the company sold its leather, failed. Shaw & Bros. kept operating until 1898, however, when it declared bankruptcy.

John Martin of Bangor (1823-1904), an accountant, worked at Shaw Tannery from about 1880 to at least 1882. This "Notice" was among his effects. He painted and annotated in great detail a large watercolor of the tannery. It is in the collections of the Metropolitan Museum of Art in New York.