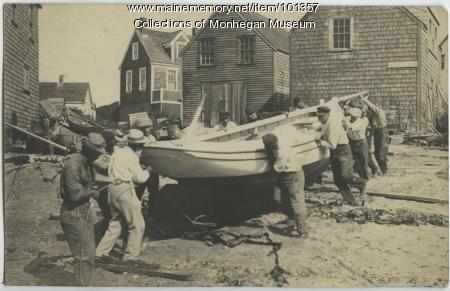 A group of men on Monhegan Island launched Claudin “Pint” Wincapaw’s boat, "Waterlily", which was the last sailboat built on Monhegan that had no auxiliary power.

Wincapaw is at the stern (second from left) with the white hat and beard. At the age of 12 he came to the United States from Portugal aboard a fishing vessel, and was taken in by the Wincapaw family of Monhegan.

On the right side of the boat, Calvin Davis stands facing the stern (third from left). Davis was born just months after his father, Sylvester Davis, became Monhegan's first Assistant Light Keeper in charge of the Manana fog signal.

On the left side of "Waterlily" near the stern and wearing a cap is Earl Field Sr., who began carrying the winter mail to and from Monhegan in the 1930s, and later became captain of the Laura B. which, as of 2015, delivers the island mail.

In a time before there were motorized vehicles on the island, all available hands were needed to launch a vessel of this size.