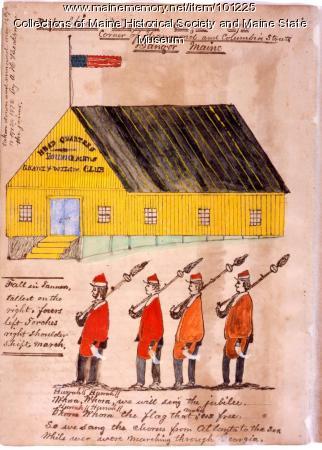 In August 1872, John Martin (1823-1904), a Bangor accountant, shopkeeper, and Republican supporter, drew the "Republican Wigwam," a temporary building that was located at the corner of Hammond and Columbia streets in Bangor.

The building was constructed for campaign purposes to hold 1,200 people, standing.

The illustration, which includes the headquarters of the Young Mens Grant & Wilson Club and four men marching and singing, is on page 115 of Martin's "Scrap Book no 3," one of five volumes he wrote and illustrated reflecting on his life and times and commenting on events in the Bangor area.