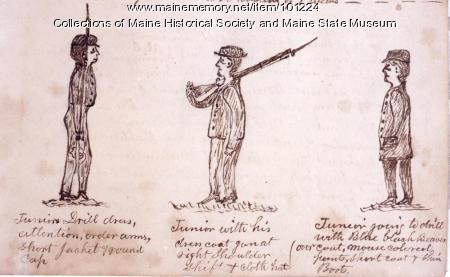 John Martin Jr. (1857-1929) was one of a group of boys in the Select School in Bangor and a few from the grammar school who formed a cadet company and began in December 1871 drilling with the Jameson Guards, a state militia group.

Junior Martin's father, John Martin (1823-1904) drew three illustrations of his son as a cadet, and wrote, "Junior was 14 years ... old when he commenced his social life and also when he commenced to perform business which occured in July last in the national Insurance office in which he stayed his school vacation of 8 weeks."

Martin drew the illustrations of his son on page 104 of his "Scrap Book no 3," showing Junior "attention, order arms," in his dress coat, and going to drill.