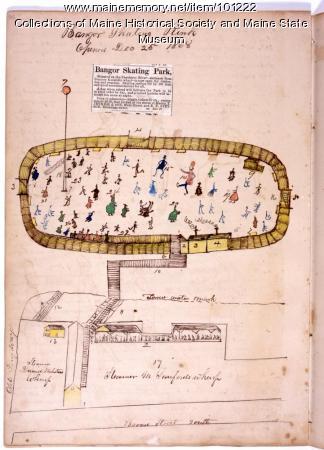 The Bangor Skating Rink opened on December 25, 1868 and Bangor accountant, shopkeeper, and recorder of historical and contemporary events John Martin (1823-1904) drew an illustration of it, replete with skaters, some of whom he named.

A newspaper clipping he included on page 95 of his "Scrap Book no 3," one of five volumes he wrote and illustrated, noted that the skating surface was 100-by-200 feet. Admission was 10 cents or $2 for a season ticket.