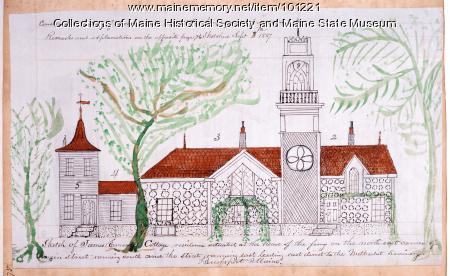 The James Emerson home in Bucksport was located at the head of the ferry on the northeast corner of Main Street.

John Martin (1823-1904), a Bangor accountant and shopkeeper, wrote and illustrated five volumes reflecting on his life and environment and commenting on events in the greater Bangor area. This illustration appears on page 75 of his "Scrap Book no 3." He drew it on another piece of paper on Sept. 8, 1867, and pasted it into the Scrap Book.

On an excursion to Bucksport, Martin wrote, "I halted at the head of the ferry and viewed the village and located behind a number of large elms & butternut trees & surrounded by a high buck thorn hedge I observed the building I have given on Page 75 and the more I viewed it the more curious things I saw about it."

He asked who owned the building and then proceeded to sketch it on a bill he had in his pocket book. He wrote, "When I had a full view of this building I gave in once that it was the handsomist building I ever saw made of wood, although I have examined buildings that cost ten times as much yet the ingenuity and take directly in the building without attaching the grounds this excells all I have ever seen."

He described the building in detail in his Scrap Book.