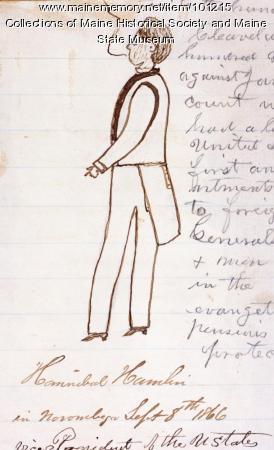 On Sept. 8, 1866, during the mid-term election campaign, former Vice President Hannibal Hamlin spoke at Norumbega Hall in Bangor on behalf of Republican candidates.

John Martin (1823-1904), a Bangor accountant, shopkeeper, and ardent Republican, drew the illustration of Hamlin and quoted some of his speech on page 39 of his "Scrap Book no 3," one of five volumes he wrote and illustrated reflecting and commenting on his life, events in the Bangor area, and contemporary activities.

Martin quotes Hamlin as saying, "We cannot afford after enduring 4 years war in which we gave up three hundred thousand young good and true men to their distant & mournfull graves, and three thousand Millions in treasure to admit our govenment to pass into the hands of those yet red and dripping with the best blood of the nation without a sufficient guarantee to secure in future our civil, moral, and religious rights."

Hamlin was a lawyer in Hampden before the Civil War. He had served in the Maine House of Representatives and the U.S. House and Senate.

Martin wrote under the illustration, "Hannibal Hamlin in Norombega Sept 8th 1866." The remainder of the writing that can be seen to the right of the drawing is part of a longer narrative that appears in full in "Scrap Book no. 3."