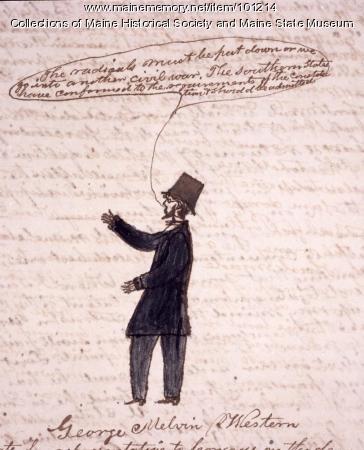 In one of a series of illustrations and narrative about post Civil War Democrats in Bangor, John Martin drew this illustration of George Melvin Weston. It appears on page 30 of Martin's "Scrap Book no 3." Martin spelled his name "Western."

The text bubble above Western reads, "The radicals must be put down or we go into another civil war. The southern States have conformed to the requirements of the constitution & should be admitted."

Martin, a Bangor accountant, shopkeeper, and Republican, wrote that Weston was the Democratic candidate for Congress from the Bangor area in 1866, challenging Republican John A. Peters, who was elected.

Martin wrote about various business schemes and scandals in which Weston was involved.

He drew Weston as he appeared at a speech before the 1866 election.