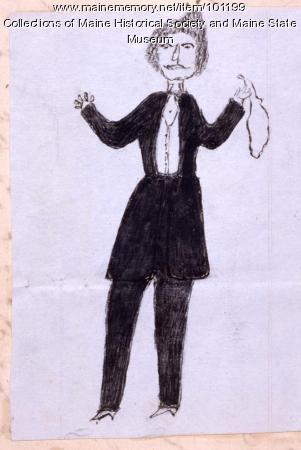 George Francis Train, a businessman who organized of the Union Pacific Railroad, spoke at the Democratic Convention in Bangor in August 1866.

John Martin, a committed Republican, attended the convention at Davenport Square and made illustrations of some of the speakers. On page 21 of his "Scrap Book 3," Martin, a Bangor accountant and shopkeeper, wrote, "This gentleman has been noted for several years and cherished by the Democrats as the hero of incendiary remarks and discourses in his language and principles throwing away the principles of a gentleman ..."

Martin added, "This gentleman was invited to come up and fire up the Irish and get them on a fever heat for the coming election ..."