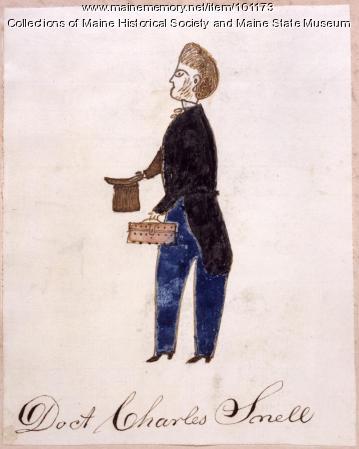 Dr. Charles Snell of Bangor was the son of a doctor. The Charles Snell pictured practiced in Bangor and his father in Oxford County.

John Martin (1823-1907) drew this sketch of the son "to show how near I can draw or represent when I undertake it in good earnest." Martin, an accountant and shopkeeper, beginning in 1864 wrote and illustrated five volumes of recollections and commentary on his life and on various people and events in the Bangor area.

Snell, he wrote, was his family's physician, delivered all six of the Martin children, and treated Clara Martin through several serious illnesses.

The sketch of the younger Dr. Snell appears on page 4 of Martin's "Scrap Book No. 3," which he began in 1867. Martin wrote, "I have given his general appearance both in form and expression although I have not represented his figure so large as he should be for he is a large man."