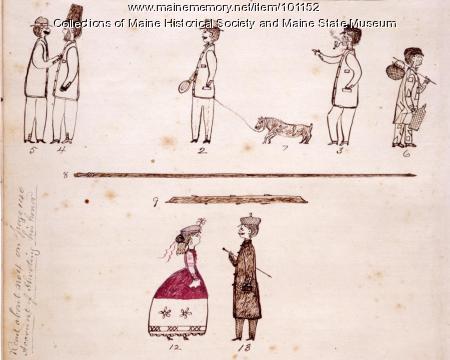 John Martin (1823-1904), a Bangor accountant and shopkeeper, on page 127 of a "Scrap & Sketch Book" he began in 1864, drew "a series of individuals and implement which cost me during thirteen months of the rebelion nearly six hundred dollars and who was the immediate cause of thousands of dollars worth of robberies in Bangor which still exist without restraint."

Martin provides details of each person pictured. No. 2 is John Thomas, No. 3 is Thomas McAloon, No. 4 is Bill Stevens, No. 5 is a companion of John Thomas (also an Irish Yankee), No. 6 is Cornelius Driskill, "a dirty ragged full blooded Irish scoundral;" No. 7 is Thomas' dog, No 12 is Nellie Chapman, and No. 13 is Cornelius Sullivan, "the most daring and desperate shaved head ever in Bangor."

Martin often made disparaging remarks about Irish immigrants. His comments are among those in several sections of the Scrap & Sketch Book that discuss the "demoralization" of Bangor, including the arrival of prostitutes.

The shop he operated was robbed a number of times.

The other numbered illustrations are implements used in break-ins.