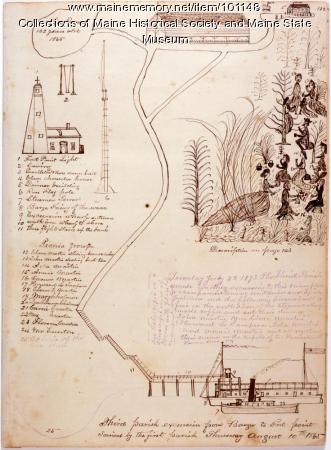 On page 122 of a "Scrap & Sketch Book" he began in 1864, Bangor accountant and shopkeeper John Martin (1823-1904) drew a full-page illustration of Excursion Wharf, Fort Pownal, Fort Point Light in Stockton Springs, and a picnic that he and his wife and children had.

Members of the Third Parish Church in Bangor, joined by the First Parish, made the excursion down the Penobscot River on August 10, 1865. Martin wrote, "My family as a whole had never been down river before and I concluded to give the day to the whole family so we prepared eatables & other articles and all started accompanied by Howard L Sampson who was paying us a visit from Harrison Maine we had no band of Music as is usual on such occasions ..."

Martin, his wife, Clara, and their children, Ada, Annie, Junior, and Elmer went on the excursion on Fairy of the Wave, a vessel Hugh Ross had built with a dance floor on each deck. He ran regular excursions to Fort Point Light from Bangor.

He wrote on the illustration that on July 22, 1873, the Third Parish, accompanied by many Unitarians and Episcopalians made the same excursion. At that time, Martin, his wife, Clara, and children Ada and Annie were on the trip.