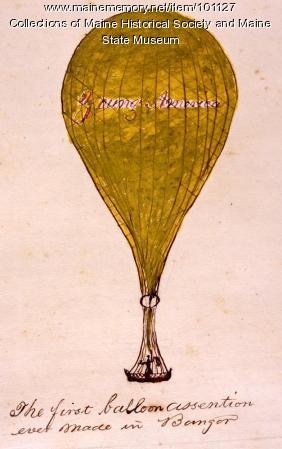 On Thursday, Oct. 1, 1857, thousands gathered on the circus grounds Summer Street in Bangor to watch the ascension of a yellow silk balloon named "Young America." It was the first balloon ascension in Bangor.

John Martin (1823-1904), a Bangor accountant and shopkeeper, attended. He wrote, "This was one of the most magnificient sights I ever witnessed in all my day. I had read and heard of men going above the clouds, I now had the reality before me and I made a vow that from that day out I would never dispute any science projected by man untill it was fully demonstrated that it was a failure or an impossibility..."

In a "Scrap & Sketch Book" he began in 1864 in which he recalled past events and wrote about current ones, Martin wrote starting on page 112 that Jim Dunning and others and Mr. Wise of Boston arranged the event. He said the balloon was about 30 feet tall when inflated.

When the balloon went up, he wrote, "the sight was so sudden and so grand that hardly a person could express even their amazement every one of all the thousands were as it were dumb for a moment when at this moment the balloon struck an upper current and began to sail off bearing easterly."

His 6-year-old daughter, Ada, commented, while the balloon was at its highest point about "poor man one mile high in the air all alone sustained by a cloth bag filled with gas."

The journals and scrapbooks Martin wrote from 1864 to about 1898 comment on his life, architecture, landscaping and gardening, education, business, inventions, family life, neighborhoods, and almost all other aspects of 19th century in the Bangor area.