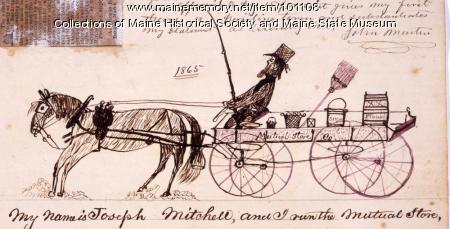 John Martin (1823-1904), a Bangor accountant and shopkeeper, drew an illustration of Joseph Mitchell, operator of the Mutual Store in Bangor in 1865.

Martin, in his "Scrap & Sketch Book," which he began in 1864, railed against the "mutual" idea as "one of the greatest humbugs that the merchants and citizens of Bangor have had to contend with since it was incorporated to this date 1865."

At the time Martin wrote the remarks, he was operating his own small store. He wrote that merchants paid into a fund that was used to buy goods in order to control prices. Martin wrote that some items were sold below what anyone else could sell them for, thereby convincing customers that all goods would be available at a low price.

Martin described Joseph Mitchell as "a cabinet maker & joiner who had worked for Shaw & Merrill & then was at work for F Muzzy & co on patterns in their foundry a great bawling rough haram scaram man who was poor and went to the baptist meeting the poorest clod of any body in the house had much to do with this store."

He further explained the workings of the group and its effects and wrote of the Mutual Store, "This store has been a curse to me ever since the day it was established it has made no difference what article I have offered for sale the first and last question has ever been aint yose higher than the Mutual Store."