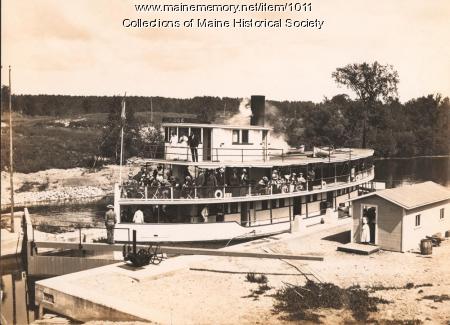 On August 18, 1847 the Portland Advertiser announced the imminent commencement of steamboat navigation on Long Pond and Sebago Lake. The launching of the "Fawn" opened a new era of passenger travel in the area, which included boats with such names as "Longfellow," "Hawthorne," "Songo", and "Bay of Naples."

The last and most formidable of the vessels was the "Charles L. Goodridge," built in 1912 by Bath Iron Works, shown here in the Songo Locks with a crowd of well dressed tourists. The "Goodridge" last of the Songo fleet, burned at her Naples dock on the night of October 29, 1932.